Originally the master bedroom of Catharine Batcheller, this is a large deluxe room with a massive headboard cradled in a luxurious half canopy and furnished with original 1800’s Batcheller family furnishings. This spacious room features a King sized bed, a sitting area outfitted with red velvet covered settee and side chairs as well as a gaming table and a carved white marble fireplace mantle. The light floral wall paper, burgundy drapes and light painted woodwork are all over looked by an original imposing double armoire. Bright morning sun is tamed by the original built-in wooden shutters that enclose a cozy reading nook. The unique shaped bath offers a spacious walk-in shower. 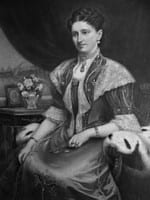 Catharine Phillips Cook Batcheller was the daughter of James Cook, a local politician before becoming a State Senator and the State Treasurer. Cook owned two mills in Ballston Spa and founded the Ballston Spa National Bank. While the Batchellers were middle class, the Cooks were wealthy. When the house was finished it was in Catharine’s name (very unusual for the time).

A graduate of Girls Academy in Albany, Catharine was multilingual (she kept a dairy at the Academy that still exists.) When Catharine was 16 her mother became too ill to serve as her father’s hostess. Although only a teenager, she took over her mother’s responsibility hosting Supreme Court Justices, Governors, and potential Presidential candidates.

Catharine was a woman of her times born before her true time. She adhered to the principles and practices of the Victorian Era, yet she was educated, strong willed, and a force in her own right.

It is doubtful Mrs. Batcheller ever went downstairs for breakfast. Servants would have brought her the mail, newspapers, and her meal. In this room she would attend to the duties of the true force behind the front. 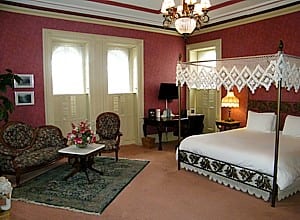 The deluxe Kate is the room we especially offer to our honeymoon or anniversary couples.Decorated in pink and mauves it showcases a king size canopy bedstead, comfortable seating area with antique blue floral parlor furniture, the carved marble fireplace mantle all under the glow of a magnificent period chandelier. This room also offers its own semi-circular covered porch complete with white wicker chairs (This feature is currently closed for repairs and will be reopened as soon as the repairs are complete). A walk-in closet and spectacular bath with both a claw-footed soaking tub and separate over-sized walk-in shower makes this room ideal for long romantic stays. The original built in wooden shutters offer privacy while the romantic lace curtains filter the bright afternoon sun. This was originally Kate Batcheller’s master bedroom. Only Kate, the youngest of the Batchellers’ three children, celebrated her first birthday. Katherine was seven when the house was completed and eight when the family left for Egypt. A woman of the world, Kate left a diary that started in 1891, telling of her experiences and feelings. The diary is over three hundred pages long and is 100% poetry!

When Kate’s mother died in 1903, she assumed the role of her father’s hostess. For the next five years she would entertain kings, judges, politicians, and, along with her father, she would have a private audience with the Pope. Although she never married, there is one poem that indicates that she may have been engaged to a German Baron.

When her father died in 1908, Kate returned to the family’s house in Saratoga. She had traveled extensively for the last 30 years. Suddenly she had the most beautiful house in the city but no real home.

In 1910, Josephine Amelia Le Saux joined Kate in the house. For the remainder of Kate’s life she and Amelia shared what was referred to as a Boston marriage.

This room was designed for the child of wealthy parents. It was in this room that Kate was indulged, as are the guests today. 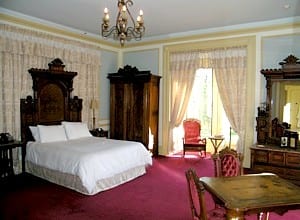 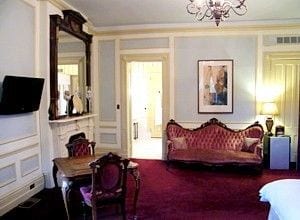 Originally George S. Batchellers bedroom; magnificent original Batcheller family furniture including antique bedstead, armoire, dresser, sofa, table and chairs enrich this spacious deluxe room. A commanding view overlooking Congress Park and our lovely flower garden and fountain to the front of the house add to the rich feeling provided by the 12′ ceilings, crown and wall moldings and the blue, gold and red colors in this luxurious room. The en suite bath is the original to the house and is equipped with pedestal sink, over-sized Jacuzzi, and separate walk-in shower as well as the original built-in medicine closet/cabinet and original wall tile. The imperial curtains and built-in wooden shutters throughout offer privacy and comfort from the bright morning sun. A cozy reading nook with leather wingback armchair overlooks the garden below. A room truly fit for the master of the house. George Sherman Batcheller began life on July 25, 1837 in the village of Batchellerville in the town of Edinburgh, Saratoga County, NY. He was related to Roger Sherman, a signer of the Declaration of Independence, and the great orator and statesman Daniel Webster.

Batcheller received his formal education at Harvard Law School where he received a L.L.B. in 1856. In 1858 at the age of 21 Batcheller was then the youngest member to be elected to the New York State Assembly.

President Grant offered Batcheller the prestigious position of Judge and American Representative to the Court of First Instance in Cairo, Egypt. Judge Batcheller resigned that position in 1885 after serving for ten years and returned to Saratoga Springs where he served in the New York State Legislature in 1885 and again in 1888.

In 1889 President Harrison appointed Judge Batcheller Acting Assistant Secretary of the U.S. Treasury. In 1891 he was made Minister to Portugal where he and his wife became on intimate terms with King Carlos, Queen Amelia and Queen Dowager Maria Pia. In 1897 Judge Batcheller was appointed President of the Universal Postal Congress. When that body adjourned President McKinley gave the 60 year old Batcheller an enviable choice, he could return to Egypt where his old post in the International Courts had recently become vacant. He chose to return to Egypt. Four years later, in 1902, President Theodore Roosevelt promoted the Judge to the Supreme Court of Appeals in Alexandria, Egypt.

In 1908 Judge Batcheller passed away in Paris while en route to his home in Saratoga. 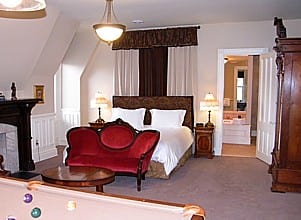 President Ulysses S. Grant was a guest in this room that features a regulation sized pool table that dominates this 18’ by 28’ (504 sq. ft.) space. A king sized bed and sitting area offering a period settee, side chairs and a magnificent carved fireplace mantle complete the feel, while a mahogany writing desk commands the bay window over looking Congress Park and the gardens below. The spacious tiled bathroom is a fitting complement with a double size Jacuzzi with mirrored back wall and large walk-in shower.

History of U.S. President Ulysses S. Grant and the Batchellers It is only fitting that the grandest of the guest rooms at the Batcheller Mansion be named in honor of the President who had the greatest influence on the lives of the family.

While the house was under construction, the Batchellers learned that President Grant was planning to visit Saratoga in the summer of 1874. They pressured the contractors to finish the mansion in time for a reception in his honor. While visiting the house, one can imagine a hundred couples, in their finest Victorian apparel, gathered for a reception. Those who stay in The Grant can reflect on the great men who, over the years, gathered here to talk politics, to reflect on public policies, or just to play pool.

The year following the reception, 1875, there was an opening for an American Judge to serve on the newly created International Tribunal in Alexandria, Egypt. Grant selected George Sherman Batcheller to fill the post (a position he would hold through the Hayes & Garfield administrations).

This appointment would hurl Batcheller from being a major influence at the state level to being a major power on the international scene.