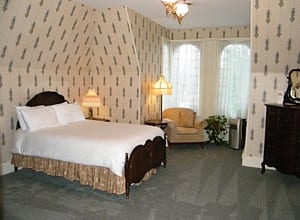 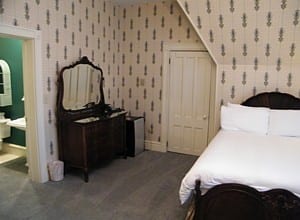 A superior category room built into the eaves of the house, this room has a queen size bed with antique wooden shell shaped headboard and a bay window that bathes the additional twin size day bed with sunlight. This room offers upholstered period furniture in its sitting area. The bath has a shower with a rainfall shower head and it has an extra roomy closet. Lace curtains complete the look of this special room. This is also the featured room in the movie “The Skeptic”.

History of U.S. President Benjamin Harrison and the Batchellers Going into the election of 1888 both sides knew the outcome would be dependent on which candidate won New York State. With incumbent Grover Cleveland, a native New Yorker, it would seem that the state would follow its native son. To offset Cleveland’s home field advantage, Levi Morton, a New York City Banker, was nominated Vice President by the Republicans. Batcheller, who was back in the Assembly at the time of the election; worked tirelessly in support of Harrison.

When Harrison won, Batcheller believed he would get a major appointment. He was hoping for Ambassador to Turkey (base of the Ottoman Empire). Eventually Batcheller was given the position of undersecretary of the Treasury. The official Secretary was ill from the beginning and Batcheller was the Acting Secretary of the Treasury from 1889 – 1891. With the debate over whether to leave the gold standard in favor of the silver standard raging, Batcheller was unable to be effective. Eventually he asked for and received the position of Ambassador to Portugal.

The Batcheller women were closely connected to the Harrison women. The connections ran deep with Vice President Levi Morton renting the house in Saratoga across the street from the Batchellers. Harrison’s daughter, who took over as hostess at the White House, would live on Union Avenue. A large French inspired room featuring a king sized bed with upholstered headboard nestled under a crown canopy of blue cameo jacquard and white lace. The mansard roof lines accent a period armoire and sitting area complete with table and chairs, comfortable chaise lounge and winged-back reading chair, all enfolded in beautiful blue and white toile wallpaper and illuminated by a sparkling chandelier. The bath is outfitted with a large walk-in shower enclosure.

History of Queen Maria Pia of Portugal and the Batchellers

In 1891, after two frustrating years as Acting Secretary of the Treasury, Batcheller was appointed Ambassador to Portugal. Kate was in her early twenties and Catharine was at her social prime. Knowing she needed to meet the queen, Catharine had a gown made in Paris. It is reported that, at the time, the gown cost between four and six thousand dollars (over $300,000 in today’s dollars). It appears that the Batchellers and the royal family became close associates.

One of Mr. Batcheller’s responsibilities was to dance with the queen at a ball. He was so proud of the fact that he did not step on her toes or embarrass his country that he wrote a poem (the Yankee and the Queen) that Kate recorded in her diary.

On the way home from one visit to the royal palace, the axle on the Batcheller women’s carriage broke. Kate’s injuries were relatively minor; however, her mother was in critical condition. Months later the Batcheller women returned to the United States and George served his last year in Portugal alone.