One of our standard rooms with a queen-sized bed and period chair, this room faces Congress Park to the front of the house. The bathroom was created from the circular tower room and features a shower built into a closet behind a curved door to match the round shape of the room. Amelia and Kate Batcheller were together for over 33 years. Like so many other mysteries that surround Amelia, there is no record of where and when she and Kate met. We do know that she was born Josephine Amelia Le Saux. Her family was from Paris and Amelia was ten years younger than Kate. Her only brother was severely disfigured in World War I and she also had a sister.

There is a collection of letters exchanged among the Le Saux family housed in the Saratoga History Museum which show that the family accepted the relationship between Kate and Amelia.

When Kate died in 1943 she left the estate in a complicated trust to Amelia. Although she preferred French to English and had no family here, Amelia would live in Saratoga for the rest of her life, dying after 1973. What remained of the trust became a scholarship fund at the Saratoga High School. The scholarships are still being awarded today.

It is interesting that we know so much about the Batcheller family due to the generosity of a person who was not (legally) from the family. Amelia watched over the Batcheller legacy for over 30 years after Kate’s death, and ensured that the legacy would live on; she was indeed a family member. History of U.S. President William McKinley and the Batchellers President McKinley took office in 1897, just in time to call on Judge Batcheller to help resolve a dilemma with the international mail.

Today we send a letter to Berlin anticipating that it will be transported first to England then by rail to Germany. We never think about which country receives what portion of the postage.

Prior to railroads, most international mail (and there wasn’t much) was placed on a ship bound for the country to which it was addressed. With the expansion of steam powered railroads and steamships in the 1900s, most mail bound for Europe was landing in either England or France and then it was transported by rail. There was a major international dispute over the portion of the revenue of the mails that countries would receive which were only serving as transport.

In 1897, an international conference involving over 140 countries was convened to resolve the issue. On the first ballot, America’s delegate, Judge Batcheller, was elected chairman. He delivered his acceptance speech in French. In less than six weeks the issue was resolved. So grateful were the countries that five awarded medals to Batcheller. These are the medals he is wearing in his portrait. 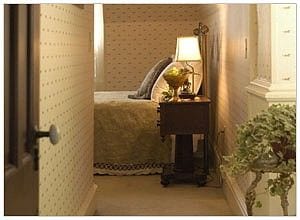 President Theodore Roosevelt was an avid horseman and so we honor his name in a room with 4000 horses (on the wallpaper). This room with queen bed and period settee fits high up in the roofline, and the tower bathroom with small windows and pointed door has a mirror that favors the slant of mansard. This room wraps the rear of the mansions third floor and so faces East, South, and West. It is our largest standard room.

History of U.S. President Theodore Roosevelt and the Batchellers Roosevelt became President in September of 1901. Like all new Presidents he had the ability to select his own candidates for political positions.

At that time Batcheller had been President of the highest international court for two years. Although Roosevelt was almost a contemporary of their daughter Kate, he respected wisdom and power and kept Batcheller in Alexandria.

Roosevelt and the Batchellers shared tragedy. The Batchellers had lost two babies and both Roosevelt’s wife and mother died the same day.

In recognition of his being a sportsman, including an excellent horseman, The Roosevelt is decorated in horse wallpaper.